Google has evolved over the years, from generic search results to deliver a better search experience to users through Ahrefs, high-quality backlinks, improved SEO algorithms, and via the creation of the preview feature – also known as featured snippets. Through this, Google Search is heading towards more immediate answers and more clicks on SERPs.

Many SEO specialists would assume that featured snippets have been designed for web sites with much lower rankings on the SERPs – Search Engine Result Pages. In actuality, most high-ranking web pages enjoy the support of having a featured snippet direct more traffic to their website even though a competitor that organically ranks below you might get featured. For this reason, I introduce the concept of a ‘low-hanging feature snippet opportunity’ as described by the Search Engine People.

“Whenever your page ranks higher organically than the featured result, that’s your low-hanging opportunity.”

According to research conducted by the folks at Authority Hacker, “50 – 65% of all number one spots are dominated by a Featured Snippets”. To better understand how to leverage these featured snippets towards increasing your online success, you need to know what featured snippets are, how it works, and how to use them in addition to thriving amidst Google’s ever-changing organic search ranking algorithm.

What Are Featured Snippets?

Featured snippets are nothing other than those snippets of information about a site page that is displayed at the very top of the SERPs upon issuing a search request to popular search engines like Google Search, Yandex, Bing or DuckDuckGo. Featured snippets provide answers to the search query by pulling relevant content mostly from pages that are strictly related to the keywords supplied than top-ranking pages.

Since the introduction of featured snippets, web search engine giants have borrowed this futuristic search functionality that makes use of a variety of feature boxes ranging from; paragraphs, lists, tables, videos, knowledge cards and entity carousels. At other times, these featured snippets are presented as a combination of the varying feature boxes. At the bare minimum, featured snippets contain a URL, a display title, and an extracted answer from sources that are in context. 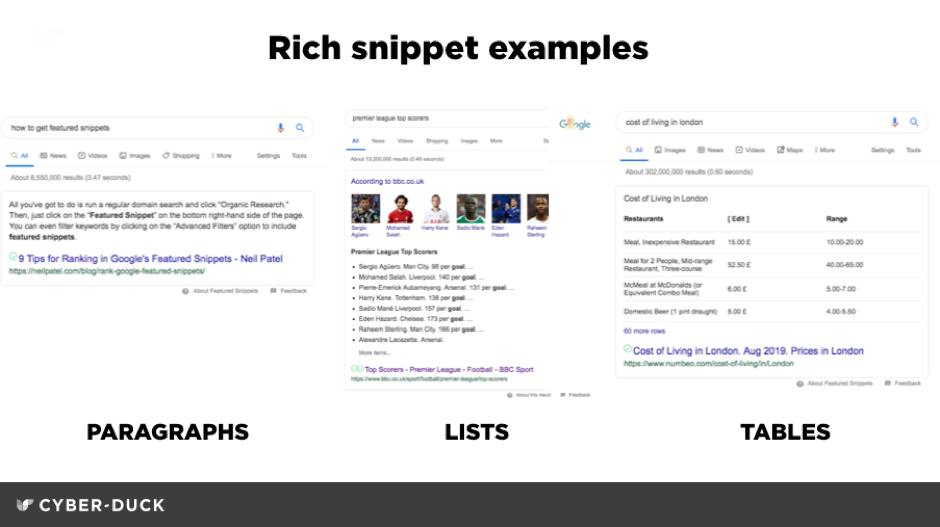 Notably, featured snippets might be the only way to earn high volumes of traffics to your website without being ranked #1 on the SERPs. Whether the idea of ‘featured snippets being able to direct more clicks and in return more traffics’ is right or wrong, we are about to find out. Nonetheless, it is essential to establish the fact that SEO and featured snippets are in-tandem. 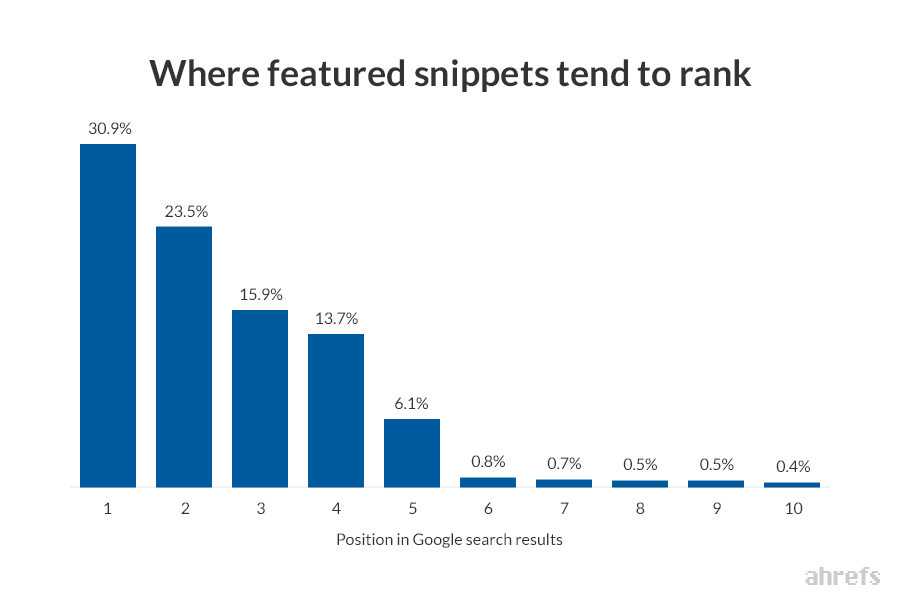 Photo credit: Ahrefs. – 30.9% of featured snippets rank at the very top and a bulk of them rank in the top 5.

You could think of these descriptive snippets as a gold mine for your SEO strategy; because you go through the hassle of having your pages ranked highest, featured snippets are those bonus rewards you want to get afterward.

The Evolution and Expansion of Google’s Featured Snippets.

Since its inception, Google has dominated the search engine market – maintaining overall market participation of 87.35 percent market share as of January 2020, as it handles 5.6 billion searches every day. The search engine behemoth debuted the featured snippet search functionality sometime in 2014: An era when SEO and advanced search engine algorithms were still a little less sophisticated. The evolution and expansion of the featured snippets provisioned by Google web search are evident, all thanks to advancements in SEO techniques.

The term was officially announced as ‘Featured Snippets’ by Google in 2016: A period with a continuing increase in the number of quick answer boxes and a time when most of us had already been accustomed to the term. By that time, the search community had started to distinguish between ‘Answer Boxes’ – which comes right out of Google’s extensive knowledge base with no apparent source, and the ‘Featured snippets’ – that is sourced from the top 10 SERPs on Google’s listings.

Barely two years after its debut into the search engine domain featured snippet was already exporting a significant amount of the tracked queries – approximately between 2 – 11%, as registered by the SEO analytics website – Moz. Per the multitude of keyword tracking data collected by the website data analysis company in most recent times, it was gathered that featured snippets have quadrupled since that time to the point of approximately 165X – from 2016.

Subsequently, the most significant search engine enterprise decided to expand and extend this feature to improve more clicks and drive traffic to web pages that adhere to SEO principles, following the company’s routine deduplication update which has the ensuing deductions;

On that note, if you are in doubt as to whether featured snippets are costing content creators like brands and publishers more clicks and subsequently more traffic, read through to find out more!

These feature snippets provide a quick and descriptive response to what is being typed into the search box. While giving the user more control over what they see, and providing easier access to answers from similar web pages as requested by the user. The ease of access tends to become handy as it gives the user a new aim to reach for and subsequently, directs more search clicks because there is no denying the value of a featured snippet.

Just as these snippets are placed above regular search result – a position, mostly referred to as ‘position 0’, these descriptive boxes affect a couple of significant impacts on the search world. If you are not convinced by now that featured snippets offer an equal and meaningful organic opportunity to well-defined web pages, then maybe the following sections might change your mind.

Featured snippets are very helpful, especially with mobile and voice-only searches. Most recently, mobile search traffic has surpassed desktop traffic because the mobile internet use is poised to continue growing exponentially and further eclipsing desktop use.

According to Statistica, within the fourth quarter of 2019, mobile devices (excluding tablets) had generated 52.6 percent of global website traffic. And with the growth in virtual assistive technologies, people are more than likely to engage in voice queries – in which case, the conventional “10 blue links” format would not serve. This idea, in turn, makes featured snippets an especially useful form to provide more clicks and even more traffics through voice-activated digital assistants. 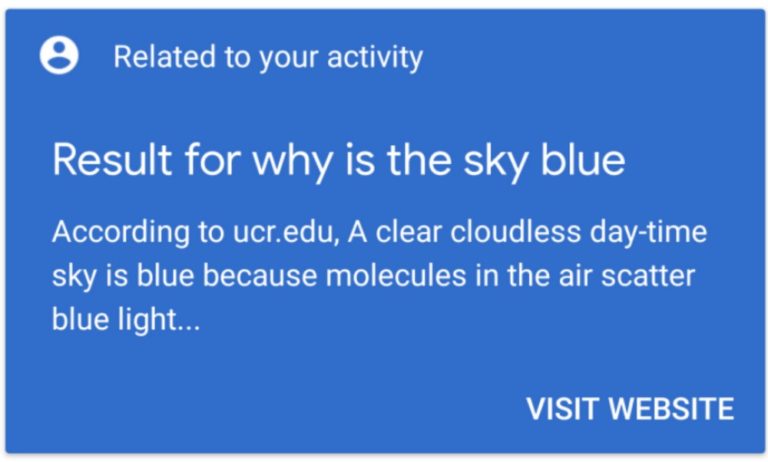 Keep in mind that featured snippets are part of an overall set of super search listing provisioned by the SERPs to provide searchers with information from a wide range of sources as it is not meant to be a sole source of information. For this reason, featured snippets are offered as a way to adapt the search to mobile and voice search users; because a featured result is what is being spelled out to them when they use voice search.

The algorithm used by Google in terms of their spoken featured snippets is done by citing the source page in the spoken result and providing a link to that page within the Google Home App – that way, searchers can click through to learn more.

Create More Clicks Via an Intuitive Call to Action to Learn More.

The following questions as; “What if someone learns all they need to know from the snippet and doesn’t visit the source site?” and “After all, if searchers can quickly find answers to their queries at the top of the SERP, why do they even need to click into the content?”, are genuinely unfounded because searchers consistently click through to the source of a featured snippet to learn more about the topic. While this might be the case for on several occasions, it may not be the same in a handful of others.

Given that featured snippets are the first thing most people see when searching for a keyword, they dominate the SERPS, gives a website more exposure while increasing the possibility for more search clicks on to that website. Top-performing web pages could be ranked for about 2,000 to 5,000 featured snippets, which gives these pages 10X the propensity to attract more search clicks than they would typically have.

A simple fact: Featured snippets were invented with the mindset of creating a more intuitive, more precise, and most useful search features. Historically, these answer boxes were introduced to allow for multifaceted search responses such that more accurate answers and information could be obtained more quickly.

Featured snippets were conceived with the sole intent of providing users the opportunity to click through to these featured pages and help them narrow down their search journey rather than cause publishers to lose traffic. The idea was and is to eradicate the chances of users visiting unhelpful pages before they finally get to what they are looking for while granting low-ranking webpages the opportunity to gain more clicks – and that seems to be working out just as expected.

Contrary to popular belief, featured snippets carry the possibility of placing those otherwise low-level web pages at the very top, in a big, bold way that attracts more clicks on the search results and builds familiarity with the brand. Featured snippets take advantage of the inquisitive nature of the human mind to drive more search clicks. They create more clicks via an Intuitive Call to Action to Learn More.

As reported by a study from Ahrefs, searches without paid ads that included a featured snippet had;

Featured snippets provide more opportunities to brands as it exposes them to prospective and unanticipated customers – even without the use of paid ads. Invariably, this is a very compelling argument, seeing as increasing your share of voice in SERPs is arguably one of the essential features to SEO KPI (Key Performance Indicators). And this is because brand-building is believed to be one of the drivers to long-term business growth.

Moreover, the more you gain more clicks – through featured snippets and Ahref backlinks, the more your brand becomes visible in the SERPs for relevant topics, and subsequently, the more recognition you gain as a market leader.

While extracting answers from the top 10 websites on the organic search results seemed like a traffic kill switch to most SEO specialists, other experts such as Glenn Gabe, affirms that featured Snippets not only haven’t harmed CTR, but they boost it in some respects. During a 2016 review on high-volume keywords conducted by business consultancy firm – HubSpot, it was gathered that websites ranking #0 resulted in more than 114 percent CTR boost even when they already held the #1 organic position.

The report also made the following deductions: Comparatively, in cases where a featured snippet occupies the #1 position, it only gets about 8.6 percent of the clicks, while pages ranking right beneath it gets 19.6 percent of clicks – which when combined presents a total of 28.2 percent clicks for #1 rankings with featured snippets. These inferences, when juxtaposed with a regular #1 ranking page with no featured snippet above it, it was found to produce 26 percent of all clicks. 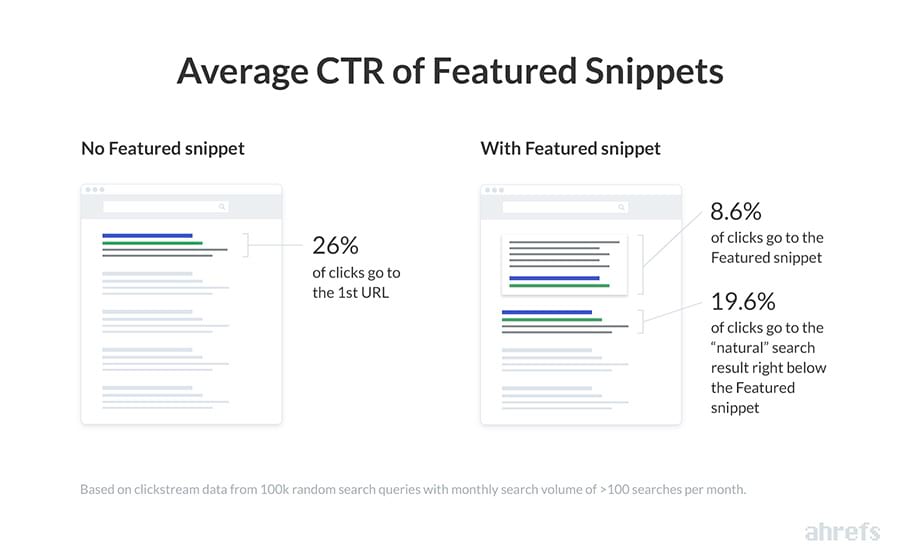 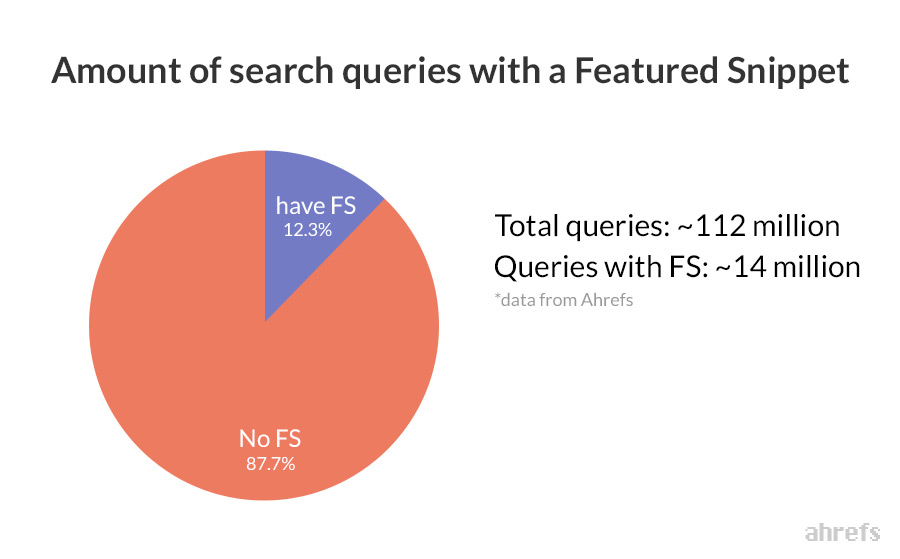 Do a little bit of research, and you would find out that the ‘People also ask’ boxes are almost always present on SERPs that have a featured snippet – to the tune of 93.9% of the time. The ‘People also ask’ questions box is yet another tool Google uses to rationalize keyword researches and better understand what it is people are looking for.

From this, it is in tune to put forth the assumption that featured snippets are “stealing” clicks from the #1 ranking results, and establishes the fact that these featured boxes can boost organic search traffic in more ways than one. Hence, it comes as no surprise as to why content creators and SEO experts are always sharing tips on how to increase the chances of having your webpage becoming one – since they had long realized that being featured in this way is a traffic driver.